Schools out for summer! (or two weeks anyway)

School ended last Friday and with the end of the year comes programs, presentations and awards ceremonies. Ashton's class did a talent show where she was able to display her mad robot-dance skills. For some reason we didn't get any pictures of her, but it's just as well because she didn't want any pictures of it on the blog anyway (she was definitely the best robot).

Kaylee's G.A.T.E. class has been studying Greek mythology and they all picked a character to learn about. She picked Thalia the muse and she was really very clever, but you can't hear anything she is saying on the video. I may have to convince her to do an encore presentation. She also had an award ceremony that I completely forgot about, but she received the "three-peat" dog tag, which means she was on the honor roll three times in a row, and straight "A's" for the trimester. 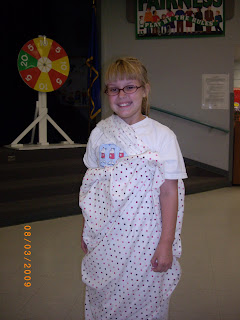 We don't have any white sheets so Kaylee had a poka-dotted toga. 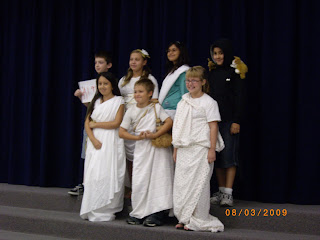 Aiden graduated from kindergarten and the clever music teacher put together "Boot Scootin out of Kindergarten" the musical. It's the same one they do every year, but it was still stinkin cute. Aiden wanted me to come to his class on the last day and he pulled the "You never came to my class the whole year" card on me so I relented. (Besides it was a half day of half day kindergarten so we were only there for 1 1/2 hours) I became a bit of a celebrity when I helped some of the kids make an autograph books and they all wanted me to sign my and Dalin's names in their books (sometimes fans can be so demanding). 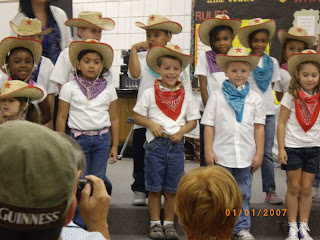 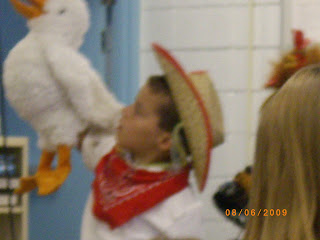 Aiden was the duck on Old McDonald's farm 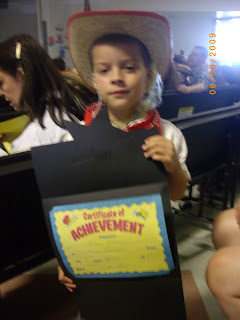 I love seeing what my neices and nephews are up to at school. Eventhough we see everyone often, we don't really talk about what's going on at school. So blogs are fun for that don't ya think?

I am so sorry I missed Aiden's program I am sure it was wonderful.