When we got to the hotel I decided to unpack and put all of our things in the drawers (something we don't usually do). The drawer I picked for Dalin housed the hotel Bible. Dalin thought he won the special prize and he carried "his journal" with him all over the room. He even slept with the thing, much to Ashton's dismay because she would roll over in the middle of the night and get jabbed by it. He wanted to take it to Disneyland everyday but we convinced him that someone might take it, so for the safety of the book he left it in the hotel. Sometimes he would call it his scriptures and he would call the hotel the temple. At least he has good priorities! 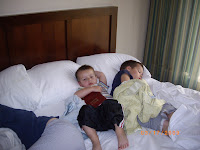 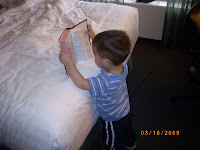 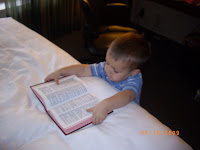 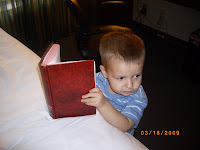 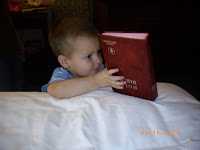 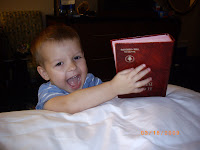 You may think that horoscopes are a bunch of junk. I used to think that too. But now I am a BELIEVER!!!!! Why the sudden change of attitude, you ask? If you read the Capricorn horoscope for the week of March 15 and my Mom's latest blog you would know. If you have not, I suggest following this link to my Mom's latest blog. For your convenience I will post the horoscope here.

Try to do as much as you can on your own without trying to force others to agree with you or join you. Not all share your passion. 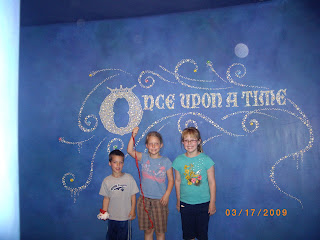 Chris has a theory about vacations, we must be doing something practically every second of every day. He does let us sleep, but he wants us up early and we go to bed late. Case in point, our trip to Disneyland last week. The kids were on track break and thanks to a tax refund it was the perfect time for our vacation. Last week was also the first week the park had extended hours and was open until 11 p.m. Even better value for our dollar if you ask Chris, but it also meant it was the beginning of spring break season. 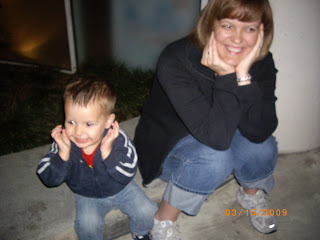 Chris would use all of the patience he could muster when we would rest for lunch for more than 20 min. To feed into the insanity that is going on vacation with Chris, he found some software (Ride Max) that will plan your Disney day down to the minute. Yes it tells you what time you should get in line, how long you should wait, how long the ride is and when you should be getting fast passes. I will admit that it worked pretty well the first day, but it's hard to stay on a schedule with young and exhausted children in tow. 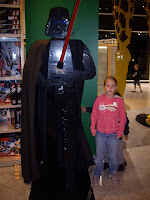 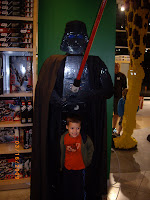 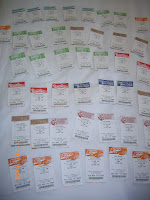 Chris was addicted to gathering fast passes and he had up to 65 at any given time (you'll have to ask him). We thought since we went on Tuesday, Wednesday and Thursday that we wouldn't have to deal with insane crowds, but apparently Disneyland is the place to be on St. Patrick's Day. Even California Adventure was packed, I have never seen so many people there (and we have been there on a weekend during the summer)! We had all been up late the night before and Chris woke us up at 6:30 in the morning so we did not watch the fireworks let alone make it to the 11 pm close time. 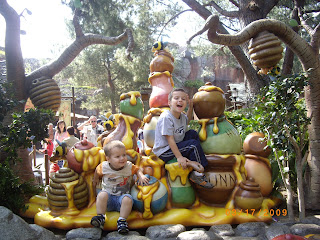 Wednesday the crowds were much better, but I think the kids exhaustion from the previous day had carried over, because they were doing their best Grumpy imitations and we had even gone back to the hotel to take a two hour break. In their defense every one but Dalin had recently been sick (Kaylee was sick while we were there), and they are just kids who don't share their dad's insanity. Dalin was the only one who didn't complain, and that is only because he had a stroller to sleep in. 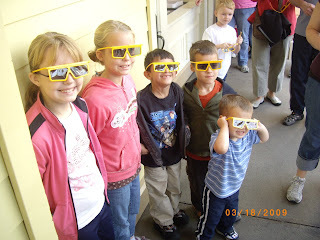 Thursday we met up with Aunt Emily and Jayden and I think they re-energized us because the kids had the best attitudes of the whole week. We didn't go back to the hotel for a break and we didn't have lunch until 4:00 but there was very little complaining. We were so proud of everyone. We were finally able to see the fireworks which were fantastic. There is a part where Tinker Bell flies in front of the castle and I heard Dalin, who is on my shoulders say, "I knew it was him." A few minutes later Tinker Bell came back and I pointed her out to Dalin saying, "Look there's Tinker Bell." Dalin tells me very matter of factually, "No that's Buzz Lightyear!" That was the "him" he was talking about before and there was no convincing him otherwise. I think we did all of the rides we wanted and even some we didn't so it was a success. 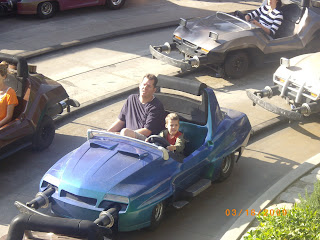 Friday we drove to Huntington Beach to to see the ocean and build sandcastles. It was over cast and windy so it was pretty chilly, but that didn't stop Dalin from running around with just his bathing suit on, we were at the beach after all. He wouldn't put his shirt and jacket on until after he fell in the ocean water. 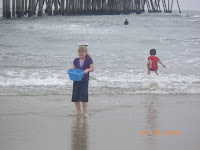 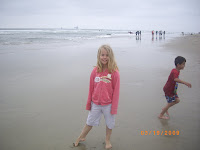 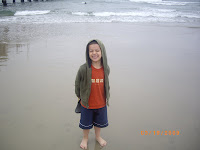 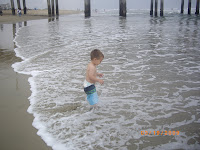 There was a Farmers Market on the pier so we bought some fabulous strawberries and oranges. Being the savvy travelers we are, we left for home about 5:00. We were able to experience my favorite part of California, rush hour traffic. The trip home felt like it took for-ev-er. Luckily we had all of Saturday to rest and recover. 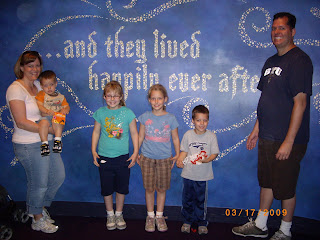 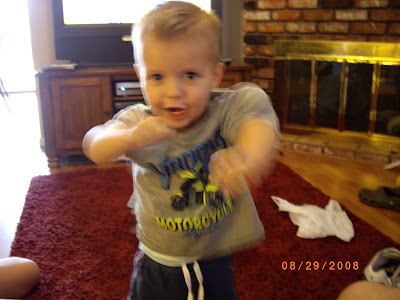 I know you have all enjoyed looking at Chris's pseudo-pants, but for the sake of giving you all something besides broken pants to look at I thought I would post some of the fun two year old things that come out of Dalin's mouth.

Buzz Light Year, Woody and Bad Guy = Toy Story 2 (you know because it has Zurg, the bad guy)

When trying to get my attention, in a very stern voice he calls out, "Mommy Kristen Edwards!" (of course that's my full name)

Dalin is pretty shy around people until he sees his siblings decide they are okay. Chris's brother Nick came to visit a couple of weeks ago and Dalin hid in the corner and cried (I know sad, Nick is a good uncle). He wanted something from the kitchen so he made me go with him. He hid behind me while we walked through the living room. When we got into the kitchen he said, "That was a good job, I hid behind your booty and he didn't see me." Unfortunately for uncle Nick he usually has to go home by the time Dalin warms up to him.

He loves to play basketball and he will sing "Getcha Head in the Game" from High School Musical as he bounces the ball. He's pretty good at making baskets in our little hoop in the back yard.

He makes us laugh everyday (lucky for him) and we are so happy to have our little caboose with us.
Posted by Kristen on Sunday, March 08, 2009 4 comments: