In an effort to make my house more sellable (I really want a new house), we are getting carpet installed and painting the bedrooms a more neutral color. While I painted, Aiden was making artwork and Dalin was telling me what a mess Aiden was making, (Aiden mess mommy, Aiden mess). Aiden was pretty exhausted by the time he was done because he paints the same way he plays the Wii, fast and furious. 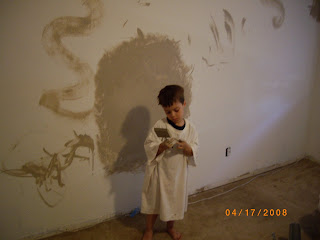 This is Aiden's masterpiece. I think it started out as a potato, but he added a stem and called it an apple. 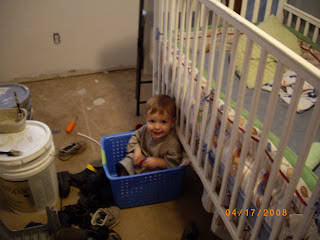 Dalin took all of the shoes out of his basket and used it as his very own "critics corner"
Posted by Kristen on Monday, April 21, 2008 3 comments:

A little while ago Kaylee did a project or game or something involving cups. Before to long the kids were building pyramids and fighting over who had more cups, so I bought them each their own package of cups. Who needs toys? Here are some of their creations. (Ignore the mess, I always do) 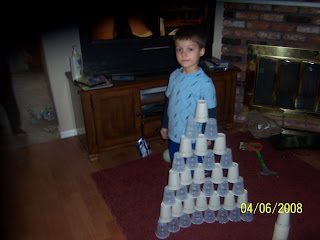 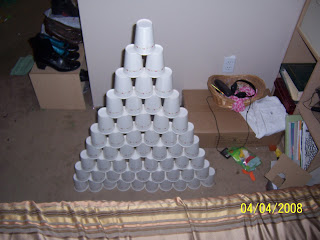 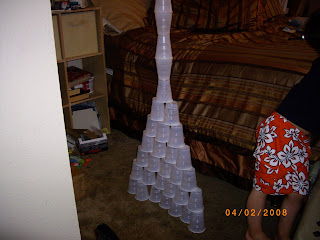 Okay, I know that there was a strike and all, but are the viewers of America so desperate for entertainment that we need a reality show about pest control? Seriously! I was watching "How It's Made" (a favorite in our home) when I saw a commercial for a show called "Verminators." This is a blurb from the press release:

"Verminators follows CEO Michael Masterston and his elite team of pest-busters to the front lines of their never-ending battle against infestations of all kinds. Rats, roaches, killer bees, bats. Black widow spiders, termites, bedbugs. Flies, fleas and fire ants. As they crisscross Los Angeles, the Verminators track their prey through warehouses, hotels and houses, and with the help of remote cameras, inside walls and plumbing systems."

It kind of makes my skin crawl just thinking about it, but at least it's an elite team. I appreciate that there are people out there who will do this work so I don't have to, but come on , really? Next thing you know there will be a competition reality show about the drama of dog grooming. Oh wait, the Animal Planet channel already snatched that one up. (No offense to you vermin and grooming fans.)
Posted by Kristen on Friday, April 11, 2008 2 comments: 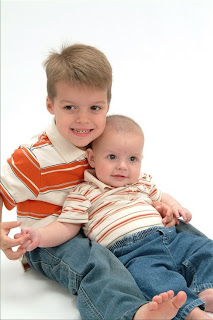 I know this is an old picture, but it is my favorite of the boys.
I think kids in general are just plain funny. They have this trusting innocence and honesty that just make them hilarious. These are a few conversations I've had with the boys that make me smile just thinking about them.

Aiden: "Mom how long is just a second in adult time?"

Me (kidding): "About five minutes."

Dalin: (While swinging at Aiden ) "Hit?"

Dalin (raising his arm in a hitting fashion): "Hit?"

Dalin: "Ooooooooh." (as if to say why didn't you say it that way before?)

I do my little turn on the catwalk

We went to dinner at a restaurant in the mall, and Dalin was flirting with most of the staff. It was kind of funny. When we were done Chris wanted to walk around the mall. There must have been a fashion show or something because there was a catwalk on the first floor. Dalin decided climb up to strut his stuff. He would wait for Chris to introduce him then he would walk down bobbing his head as he went. It was hilarious.
We are in our last few days of track break, and this week just turned out that all of the cousins in school were out so we decided to have a picnic. All but one of the kids Henderson cousins were there, and a couple of my cousins and their kids were there as well. The kids played, the moms visited, and the weather was absolutely beautiful. It is so much fun to have so much family in town.