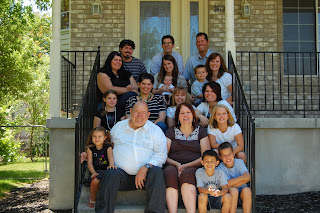 Most of the Edwards crew. We were unfortunately missing Emily's husband and daughters and Lindsay's husband and daughters. Maybe next time:)
Chris's family lives all over the place. We are lucky enough to have one of his sisters here in Vegas, but his parents are in Arkansas, a sister in New York, another sister in Texas and his brother who lives in Utah is going to be moving to Rhode Island in August. That along with his parents upcoming 40th anniversary and a baby blessing seemed like a good reason to have a family reunion. We decided to rent a house in Salt Lake so we could spend actual quality time with the Edwards family. The house we had originally reserved became a case of false advertising (it was dirty, not wheelchair accessible, and previously had cats) so the rental agency was contacted and we were moved to a bigger much nicer house. It was awesome! There was a hot tub, a game room with air hockey foozeball and ping pong, 5 bedroom, 3 1/2 bath and enough space that the whole family could just hang out and not feel like we were on top of each other. There were fireworks across the street on Fri and Sat night and a parade that on the street next to the house on Sat morning. They said those were for Taylorsville days, but I'm choosing to believe it was for our family. It was fabulous to relax and visit and play together as a family. Everything worked out perfectly. Thank goodness aunt Lindsay and aunt Kim took lots of pictures, because I don't think I even took my camera out. 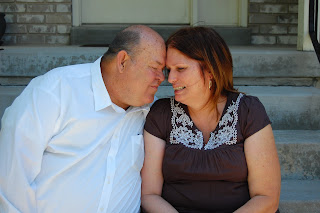 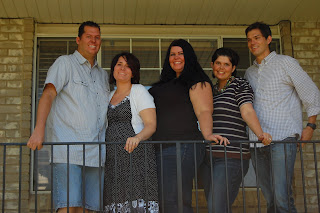 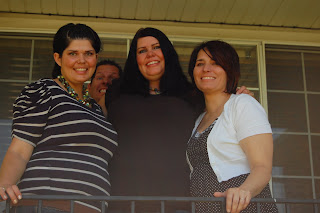 This picture cracks me up! It is typical Chris. These poor girls put up with a lot from their older brother.
Posted by Kristen on Tuesday, July 05, 2011 No comments: