The things I go through just to get a nap!

On Tuesday I had my wisdom teeth taken out. I only had two (the top ones) and there was minimal pain and no swelling. I was actually excited because I knew they would give me drugs to make me sleepy which meant I could sleep all day without guilt, and sleep I did. My children, who usually walk right past Chris to ask me for something, even did really well at leaving me alone. It was glorious! Chris took some video, hoping it would turn out to be you tube worthy, but alas I wasn't any more exciting under the influence than I am in real life.
Posted by Kristen on Friday, March 26, 2010 1 comment:

Because I needed to feel a sense of accomplishment

Not to say that passing out popsicles and playing taxi driver aren't accomplishments on their own, but I've pretty much mastered those aspects of my life so I wanted to move on to something a little more challenging. I have a couple of patterns I got on sale a while ago, so I took Kaylee and Ashton to the fabric store, let them pick out their favorites and got to work. Once you add in the labor I think it would cost less just to buy something from the store, but I was caught up on my cartoons so why not take on a project. Here are the results. 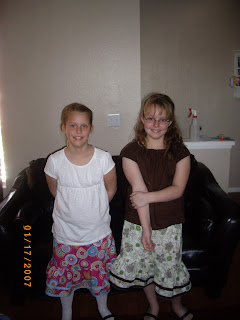 (Why do I always forget to clean off the wall when I take a picture?)
This is the first thing I've sewed that I've kind of loved. They turned out so cute (if I do say so myself). I didn't have time to make a shirt for Ashton, but I think the store bought one worked out just right.
Posted by Kristen on Sunday, March 14, 2010 3 comments:

My kids have been on track break for a few weeks, so I get very little computer time. Here I am trying to play a little catch-up. At the beginning of the break we tagged along (or invited ourselves) with my brother and his family and headed up to Brian Head for some snow tubing fun. The weather was beautiful and warm enough that we all ended up taking off our coats. Kaylee and Ashton each took a spill in the hill, but they were tough and we all came home with ll our bones in tact. 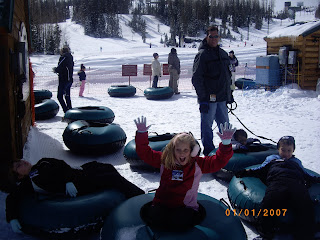 Ashton seems very excited, Kaylee not so much. 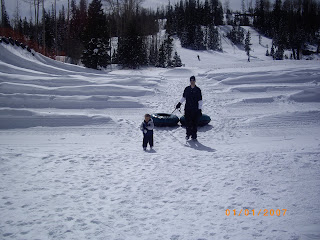 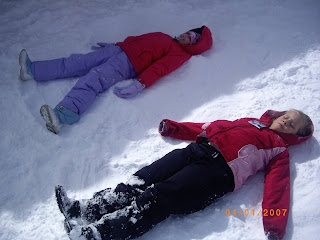 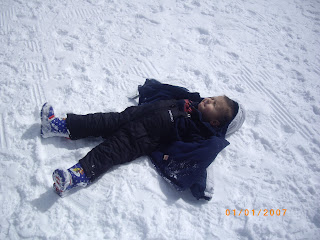 Snow angels
On the way up the mountain Dalin was making a snowman plan. He told me he needed a carrot and some rocks to make a face. I told him that sounded like a good idea, but I didn't have any carrots or rocks.

D: "That's okay, I'll just ask the rabbits for some carrots and the birds can get the rocks for me and I'll go to the button store and ask the button man for some buttons."

Pretty smart, but I didn't want him to be disappointed when none of those things happened so I posed a question to him.

"Well what if the rabbit doesn't want to share his carrots and the birds can't find any rocks and the button store is closed for the day?"

D: (after a thoughtful pause) "Well, I better go see the button man first."
I guess everything else was easier to deal with than hours of operation. 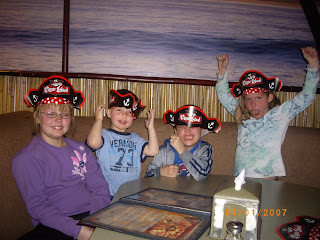 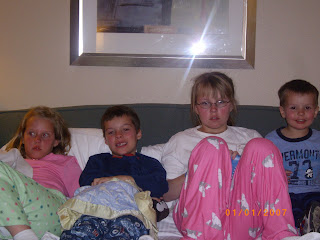 Like I said it was sunny and warm on the mountain. I meant to bring sunblock, but I forgot. The best intentions equal sunburned faces.

We decided to stay in St. George where we could get a less expensive room. We booked our hotel through priceline for $48 a night. We completely scored! We got a suite with a fridge and microwave and two separate rooms. Yes Chris and I got our own room. I thought maybe all the rooms were suites, but I looked into the rooms that were being cleaned as we were on our way down for the free hot breakfast (free breakfast!) and they were regular rooms. Dalin like the room so much that he decided we shouldn't go home. I told him we didn't have any more money to pay for the room, and if he stayed the hotel people would make him clean rooms and make beds. He had no problem with that and made the bed he had been sleeping on as quick as he could. He's too entertaining to leave behind so we crushed his dream and brought him home anyway. 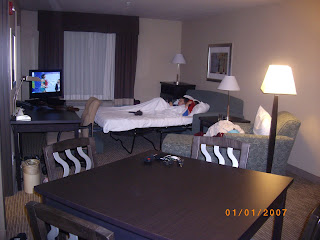 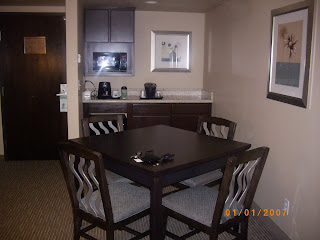 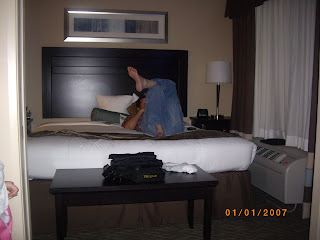 Chris was taking the kids to their cousin's house the other day when Dalin said "Dad I didn't get buckled." Their cousin only lives five minutes away and they were already half way there so Chris told him it would be okay for a minute if he just stayed in his seat. This is what Dalin thought of that.

"Oh no, I'm gonna go to jail. Dad you could go home and bring me the cheese sandwiches I left on the table. I know! I will tell the jail man that I need to go potty and he will let me out so I can go home and go potty, but I will stay home and eat popsicles."

Who knew coppers were so easy to fool? 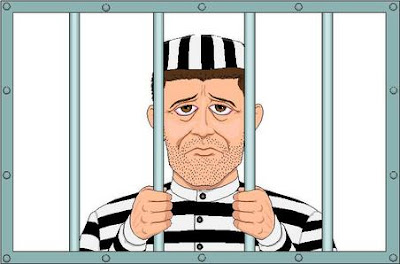 The President of the United States

A couple of weeks ago President Obama was in Henderson. Not only was he in Henderson, he had a town hall meeting at the high school directly behind my house. I didn't go of course because I don't like dealing with crowds, my kids had the day off school and I feel bad asking someone to watch all four of my children and it was broadcast on all of the local stations so why not watch it from the comfort of my own home. My brother and his wife went (he got tickets from my uncle) because as he put it "How often will the President visit the city our uncle is the mayor of?" Good point. I didn't notice a lot of extra traffic on our street, but when I looked out the back window I saw some men on top of the school building. I pointed them out to my kids and they were impressed and had the following conversation.

Kaylee: "Look at those guys in the roof, I think they're with the secret service."

Ashton: "No way! If they look away for even one second we could all be in trouble!" 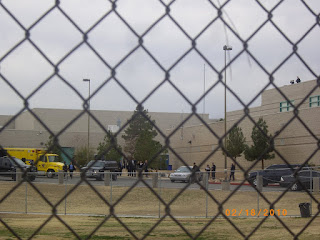 This is the view from our back fence. The two black dot in the upper right are the protectors of the universe, or something like that.
Posted by Kristen on Wednesday, March 03, 2010 1 comment: