Well our dear sweet Kaylee has turned eleven. ELEVEN! For her birthday Chris and I gave her a "reverse perm" (that's what they called it). She got her hair chemically straightened. It's not completely straight, but it's so much easier to comb through so it was totally worth it. We also were able to go to an advanced screening of Toy Story 3 the night before her birthday. I have said a number of times how excited Kaylee gets about birthdays and holidays and she always gets up early. Because we got in late after the movie, she actually slept a little longer. She hasn't done that since she experienced her very first birthday. As a matter of fact, she was so excited after her first birthday party, that when we tried to put her to bed that night she ran back and forth in her crib for about a half hour. It was to cute. After that she was hooked. We are so lucky to have Kaylee in our family. She is smart, funny and beautiful. She is a wonderful oldest child and a great example to her family. We Love You Kaylee! 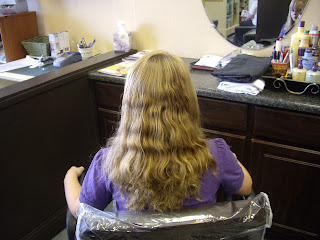 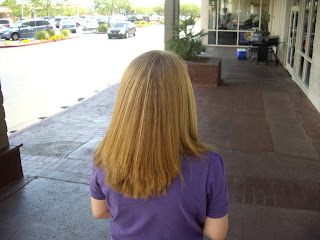 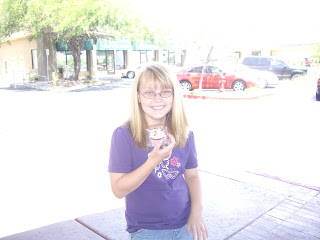 There is a bakery in the same shopping center so we stopped for a cupcake. 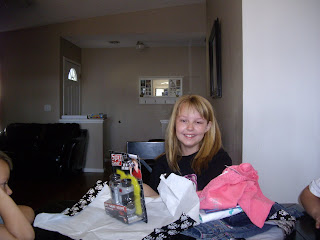 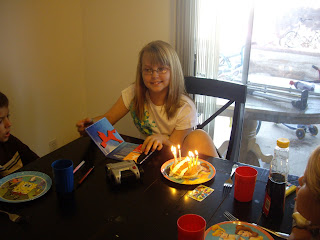 Kaylee doesn't have much of a sweet tooth (is she really my daughter?) so cupcakes in her classroom was enough for her. We put candles in her pancake (her favorite dinner.)
Posted by Kristen on Wednesday, June 16, 2010 1 comment:

Dalin has been obsessed with being four ever since his BFF Rylan had his birthday in January. Yesterday after what seemed like forever (to him anyway) he finally reached his goal. A couple of days ago he was sharing his concerns that he would be to big to fit into any of his clothes or shoes or even our house once he woke up on his fourth birthday, but he took my word for it that everything would be alright. Every time I would ask him what he wanted for his birthday he would say, "Just all the stuff for boys." Not to hard to please huh:) He was sure to remind me all day long that he was four now and that he was the birthday boy, and the birthday boy gets to do whatever he wants. We sure love that boy! 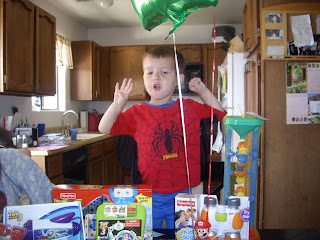 Presents! (obviously not all of the stuff for boys, but he was satisfied nonetheless) 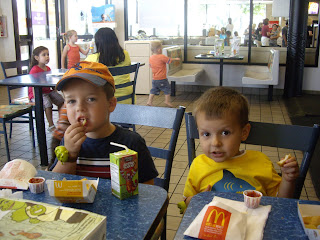 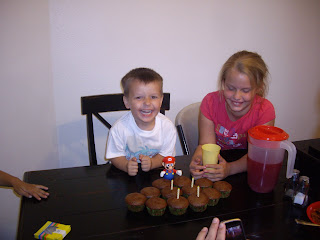 Cake! (I had planned on some Mario Bros. theme but it fell apart at the last minute so he got unfrosted cupcakes instead) 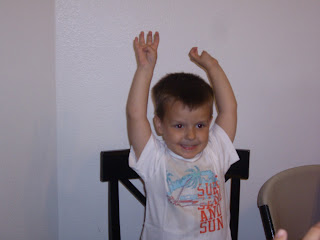 That's why we love the internet

Our car has been having a couple of issues for the past few weeks, and because we are going on a loooooong road trip soon I took it to the dealership to get checked out. Most of my concerns were taken care of and covered under the extended warranty which was fabu. The air conditioner in the back that only works on the highest setting however was not. The mechanic told me it was going to be $275, and when I asked if it was difficult he said oh yeah definitely. So I was resolved to just let the kids deal with it. We do live in Vegas after all and the temperature surely warrants the highest setting. Besides the front air worked fine, so it really didn't bother me;) I told the guy no thanks to that repair and went home. This particular car malfunction really bothers Chris so he decided to look up how to do the repair online and see how difficult it really was. Turns out not very. The part was only $20 and with the step by step directions Chris found, it only took about fifteen minutes start to finish. Now if only everything car related turned out to be that inexpensive.
Posted by Kristen on Saturday, June 05, 2010 3 comments:

I wanna be famous!

In this age of reality television, where everyone and their dog gets far more than their fifteen minutes of fame, Aiden wants his piece of the "new" American dream (hard work and perseverance are pretty much overrated anyway right?). Aiden has asked me on several occasions if I think he is good enough to be on American Idol, or So You Think You Can Dance. He wanted to know if I thought people would pay to watch our family on t.v. He even jokingly (I hope) wondered how much the people on the Biggest Loser weighed and how much it would take to get him to that point. Well last Friday he began his journey out of obscurity. His school had a talent show and he decided he wanted to be a part of it. I don't like to discourage my children's endeavors, but when Tuesday came around and he still hadn't chosen a song, let alone practiced, I was a little hesitant to agree to give him my permission. He was pretty insistent so I relented. He felt picked on when I made him practice, but he made it through and his teacher even let him pick two of his friends to be back up dancers (the day before the show). The funniest part to me was when about three or four girls on the front row called out a "Hi Aiden!" when he got up on stage. He's well on his way if he already has groupies. I am really proud of his performing courage, a quality I know he didn't get it from his parents.
The woman on the floor is an aide that helps a boy in Aiden's class, and it looks like she helps with choreography as well (but most of those moves are all his). Thanks Miss Molly!
Posted by Kristen on Wednesday, June 02, 2010 6 comments: