Because it's been while since I've posted and we haven't really been doing anything new I thought I would post a recipe. 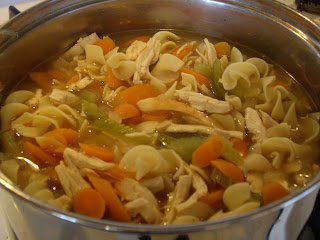 Bring water to a boil and cook noodles. While noodles are cooking add one quart of chicken broth vegetables and bullion to another pot and bring to a boil. Boil for 15-20 min. Drain noodles and add shredded chicken broth and vegetables. Add as much of the remaining chicken broth as desired.

*When doubling the recipe, use the same amount of broth
Posted by Kristen on Monday, April 26, 2010 2 comments:

Never underestimate the power of a penguin

When I was in Jr. High we had to run a mile every Friday. This was honestly the bane of my existence. Running and I are not friends, we never have been and I highly doubt that relationship will ever change. Because I never finished in the required time I got a C in PE. Shameful, I know. I now have a child who will soon be entering the middle school world, and I want to conquer this challenge as well as give her some practice so I came up with a deal for my children. There is a website called club penguin that they are currently obsessed with, but they need a membership to access the best of the games. So I told them when they could run an entire mile I would buy them a six month membership. I figured they would be excellent at motivating me, and the prize I offered was exactly what they wanted. I also figured we would have to do a few training sessions before I would have to pay up. I was wrong. Kaylee, Ashton & Aiden all ran the entire mile. Aiden even finished 1/2 a lap in front of me! So now I have to pay up much sooner than I expected, and think of more motivators so they will still want to go to the track with me.
Posted by Kristen on Saturday, April 10, 2010 2 comments:

A sleep over and a prankster

Last week in honor of spring break we had a girl cousin sleep over. There were six girls and lots of fun. There was pizza making, song singing, pillow stuffing, wii playing and movie watching. I of course did not take any pictures (I always forget), but luckily Chris was home long enough to get a couple of pictures and some sing along video. I could only hold out until 1:30 am, but I heard most of the girls stayed up until 3 when the voice of reason came in the form of Emily and the TV was turned off and sleep came. Sugar em up and keep them up late, that equals a successful over nighter right? 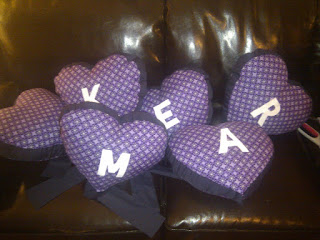 I made these pillows and the girls stuffed them. Chris calls me an over achiever, but it honestly seemed really simple in my head. Besides you have to go home with a memento! (Those are their initials in case you wondered) 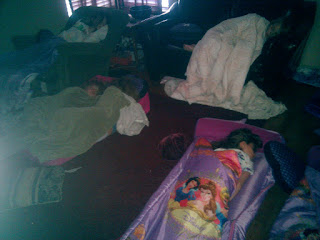 Sleeping beauties!
April fools was the next morning and our true holiday enthusiast, Kaylee, made sure to research some suitable pranks for the day. She and Ashton put plastic wrap across the boys doorway, which unfortunately stuck to itself which made it a little easier to see. So Aiden put tape (sticky side out) across the girls doorway, but Ashton was not tricked either. The best trick of the day was a rubber band around the trigger on the sprayer in the sink. I turned on the faucet to rinse off the breakfast dishes and was sprayed. I thought it was a good prank, but I thought it would have been funnier if it had happened to someone else. So we decided to do it to Chris when he came home. The kids have heard enough stories of Chris's childhood so they knew he totally deserved it. When he finally came home Kaylee distracted him, while Ashton set up the prank. When they led him to the kitchen, I didn't want him to know something was up so I followed at a distance. I waited in the entrance to the kitchen and watched. Chris was definitely surprised, but the sprayer was pointed wrong so only his hands got wet. But never fear, I being across the room got soaked.
Posted by Kristen on Monday, April 05, 2010 1 comment: