For Christmas I made the kids pillowcases out of some super soft fabric. Kaylee, Ashton and Aiden immediately put theirs on their pillow. Dalin tried his out for a couple of days then decided it was too big for his pillow (he refuses to use a full size pillow) so it kind of got forgotten. One day he decided it would make a good blanket/toy holder so he loaded it up with his favorite things and carried it around the house. I needed to go to the mall and I let him bring it, figuring he would leave it in the car. I was wrong. The following was an effort to get him to leave his loot behind.

Me: "Dalin people are going to think you ran away from home if you bring all that stuff in"

Dalin: "They will look at you and know you are my mother. How could I be running away when my mother is right there."

"They might think I'm Santa but I don't have a hat."

"I could be a robber but I'm not wearing robber clothes either."

What other argument could I have? 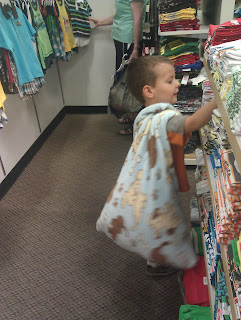 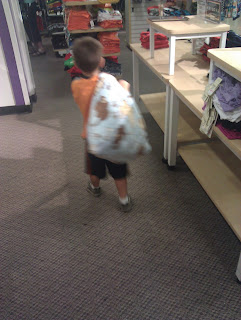 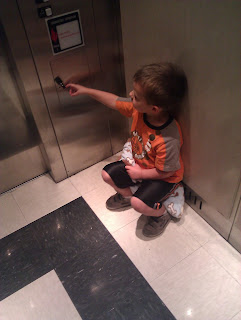 Not only did he have a treasure bag, but a handy seat for the elevator ride:)
Posted by Kristen on Tuesday, June 07, 2011

Jordon and I just saw this. That Dallin is a funny one!