Aiden was able to participate in the first Jim Thorpe second grade Spelling Bee. He had three "Bee's" in his classroom and the winners of those competed against each other to determine the classroom champion. Aiden took that title and he went on to compete against the 12 other second grade champions in his school. I was really proud of the way he took the initiative to study, I never had to tell him to practice. He didn't win (they started using third and fourth grade words) but he was AWESOME! 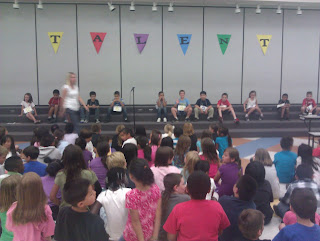 The kid to the right of Aiden who took the prize was hilarious. He kept winking and saluting the audience after he won.
Posted by Kristen on Monday, June 06, 2011