Soccer season has come to an end. Actually it came to an end a couple of weeks ago, but I'm a slow poster. My team the Ghost Hunters had a 2-5 season, but at least everyone had fun. They said that was the whole point in our coaches meeting to I'm going to hold tight to that one:) A lot of the parents asked me if I was going to coach again. In the end I enjoyed it but my friend, who actually knows about soccer, is moving and I was worn out by the last game so that would be a no.

Ashton's team the Wildcats did better with 4-1-2 season and she really enjoyed herself as well. They have both told me they would like to play again next year so I count the season a success! 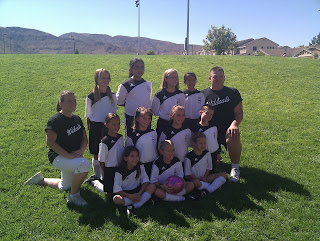