It's that time of year again, you know the one where all types of pumpkin patch and costume pictures start popping up on the blogs of the world. Well here is our contribution. We went to the insanely over priced pumpkin patch for FHE this week. I guess the economy is in a slump, but it's kind of crazy where $30 worth of tickets only gets the kids a couple of rides. Enough complaining. The kids had a lot of fun and we never go with the intention of buying pumpkins, so it was a good night. 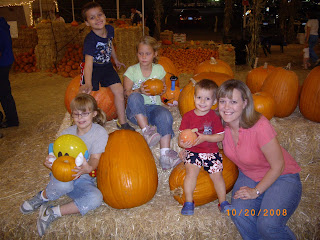 Last night we had our ward trunk or treat which is always a family favorite. Aiden was an astronaut, Dalin was a football player with Ashton as his cheerleader and Kaylee was a vampiress. Every Halloween I promise myself that I'm not going to make costumes again, and every year I break the previous Halloween promise. This year was no exception, but at least I only made one. The costume Kaylee liked in the store was $25, and I was sure I could make it for much less (or not). I ended up spending at least that much, plus the time it took to actually make it. At least it wasn't to difficult, and I got it done in time. I was telling my brother that I wasn't going to make any more costumes and he said, " You lie, you know you're addicted." He's right, but I'm going to live in my lie for a little while longer. 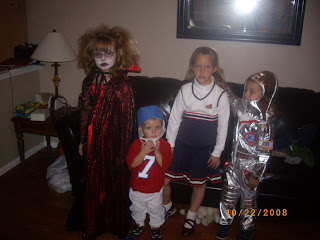 Wow! I sure can't tell you didn't buy Kaylee's costume! That looks great. The other kids are cute too.

They look great! I couldn't make a costume if my life depended on it. Actually, I've made a few and the results were never very good. If you can do it and you enjoy it, go for it!