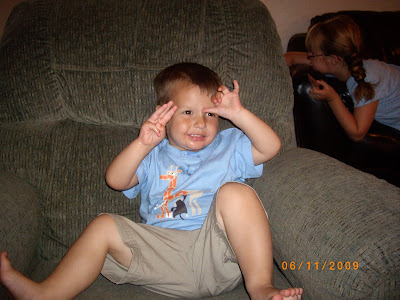 He's holding up three, in case you couldn't tell.
What the? I think because Dalin is our baby each of his birthdays cause me to have a minor freak out. My stream of thought on this birthday is "Three is not a baby, it's not even a toddler anymore. He's a little boy! AAAAAAHHH what happened to my baby!" It's just a reminder of how fast time is flying and I don't feel like I'm keeping up. Enough of that, here are a few of Dalin's favorites.

Food: Watermelon, strawberries and popsicles
Color: Green
Sayings: "Stinkerpot", "That doesn't make sense" and "See I told ya."
Pass time: Picking his nose (It's constant. Seriously I can't get him to stop, any suggestions?)
Super hero: It's a tie between batman and spiderman
TV Show: Go Diego Go!
Movie: Toy Story & Toy Story 2 (a.k.a. Big Buzz Lightyear and Buzz Lightyear, Woody bad guy)
Toy: Anything he can use as a sword

I would post his three year old stats, but I'm a bad mom and I haven't even set up his well check yet. Kaylee is excited for any special occasion so she was awake before anyone else. Shortly after I told her she could wake up Dalin, he came running out with his grumpy grunts and hid behind the chair. I don't think he even saw the gifts. After it was apparant we weren't going to be able to coax him out, I went and picked him up. When he finally realized there were presents he perked right up. After he finished opening his presents he looked up and asked me where his cake was. We are so happy to have our funny, mostly happy, cute little boy in our family. Happy Birthday Dalin! 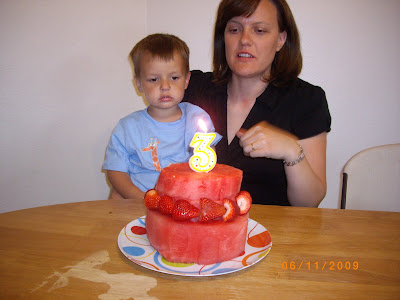 Kaylee's birthday is four days after Dalin's which usually means four days of cake. Not to diet friendly so I borrowed the watermelon cake idea from my very clever cousin Jessie. It incorporated two of Dalin's favorite foods, and I won't feel bad about eating the leftovers.
Posted by Kristen on Thursday, June 11, 2009

the cake is made out of watermelon. that is GENUS!!!!!Happy Birthday Dalin.