You gotta make a living...

Aiden likes to make a snack shack in our home on a regular basis. He stacks pillows around a little slide then gets treats from the pantry to "sell" to his siblings. As you can imagine Halloween was an abundant time for him, you know with all of the extra candy around to sell. One night his cousin Jayden was over while Aiden was in business, and Aiden was quick to loan him some of the money from my change jar. Aiden thought himself quite clever because he had made himself some money. One night when I was saying good night to him he said to me in a sing-song voice, "You don't know where I hid the money." To which I replied in the same voice, "That's called stealing." Aiden's response, "No it's not, it's called getting a job and earning some money." I think the laugh he gave me was worth whatever change he ended up with. 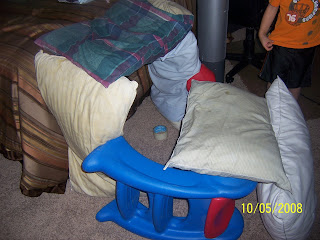