Because I'm a Dud

At our ward's Halloween party one of the primary kids asked me why I didn't have a costume. Simply because I'm a dud. Why has it taken me so long to post about Halloween? Because I'm a dud. Anyway here are some pictures of our little ghouls and goblins (or football players and cheerleaders). 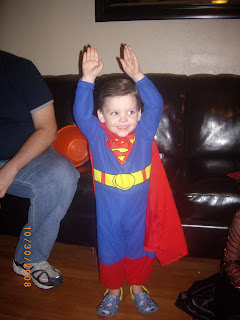 My nephew Scott, isn't he the cutest Superman! 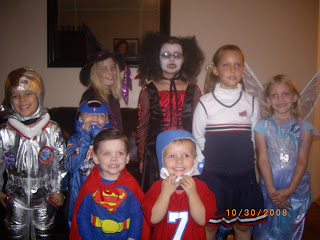 My brother Aaron and his kids came with us. (boys: Aiden, Kyle, Scott & Dalin. girls: Emily, Kaylee, Ashton & Abby) My brother Ryan's little girl Kinsey came with us too, but she was being a little camera shy. 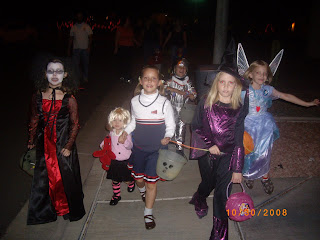 The trick or treaters in action. 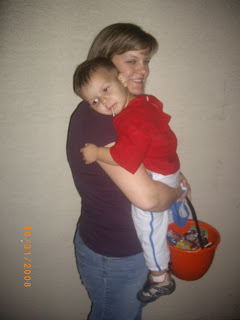 We only had about five more houses to go, but Dalin was done. He made sure to have a sucker though, or to him happiness on a stick.
Last night for FHE we went to the district to ride on the carousel. Some friends of ours gave us some tokens about six months ago and we finally used them. It was fun, but the parking lot was completely full because John McCain was speaking less than a block away. We could hear the cheering. On our way home we asked Aiden who he thought should be the president. He said McCain. When I asked who McCain was he said, "You know that guy he's kind of brown with a triangle face." I told him that was Obama, and he said, "oh yeah that guy." When I asked him why he said, "Because that other guy is kind of old and wrinkly, and he will probably pass away pretty soon and then we wouldn't have a president anymore." 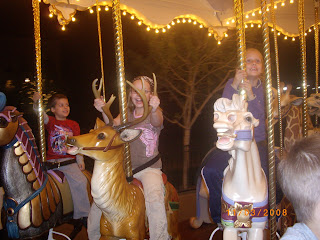 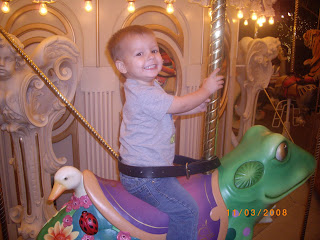 your kids are to funny, they say the funnest stuff.

That's funny about what Aiden said about president. Rachel said she wanted McCain to win because he looked nicer than the other guy. I think that's a valid reason, don't you?