Chris had some gift certificates so we decided to go out to lunch today. The restaurant had one of those claw machines (you know the ones with the claw that doesn't actually have enough strength to pick up any of the prizes) . We were sitting really close to the game and Aiden, Jayden and Dalin were looking at the games and massage chairs while we were waiting for our food to arrive. I looked over to check on the boys, and I saw Dalin standing by the claw game. After a second I realized he wasn't by the game, but actually inside of it. I guess there was some toy he thought he really needed so he climbed right in. While everyone else in the restaurant found it humorous I was an-gry with that boy. We tried to get him out, but the flap only went toward him and it would get stuck on his feet or legs. The manager tried to call the vendor to come unlock the machine, but he could only get his voice mail. Dalin wouldn't stand up because he didn't want the manager to be mad at him. I also think he was a little embarrassed when he saw the crowd he had drawn. Some people were suggesting that we break the door to get him out while others were taking pictures with their cell phones (they did ask permission first). After about ten minutes Dalin decided he really didn't want to be stuck any more. I was finally able to get him to stand up and scoot back far enough to give him a little space to scoot his legs under the door followed by the rest of him. Luckily it was before the manager decided to call the fire department. He was slightly traumatized and didn't want to look at or talk to anyone. After he had calmed down I asked him why he did it he told me "Mom, you forgot to give me money so I had to get the toy myself." It really was a prime example of how he's been acting all week. I wonder how he learned to be just like his dad at such a young age. 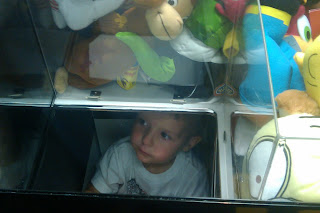 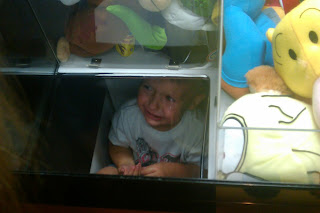 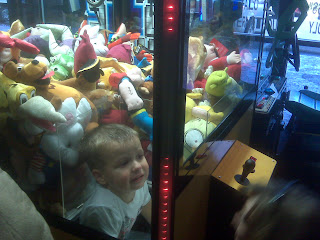 I'm so glad he got out okay, I felt a little claustrophobic just looking at him!

Wow...I thought this kind of stuff only happened on the news. Poor Dalin, he takes after Chris.....much too inquisitive for his own good

WOW!That's a great story!! How "scurry" that must have been! (and now funny that he got out OK!) so, did you ever get to eat?

So, did he get a toy? Remember Kim and Cory Jones? The same thing happened to them with one of their boys! I guess it's more common than you might think.

hahaha, i am laughing so hard. too funny. it is like a video you might see on utube.

That is so hilarious! I really can't stop laughing. Poor kid though. I hope he's not too traumatized.

That is awesome. I love how it was your fault, Kristen, for not giving him money for a toy. Poor Dalin, all that work and still no toy.

oh my goodness! this is hilarious kristen! Your kids are absolutely adorable! It was so fun to hangout with you guys a little bit this summer. Hope all is well in vegas!