I have always thought I was pretty indifferent to Valentines day, but this year I realized  it is probably my favorite holiday. Not because of all the commercialized nonsense that makes people feel like they need to go into debt to prove their love, but because some of my favorite traditions happen around the holiday of love.  They are cute and easy and small, but I love them. 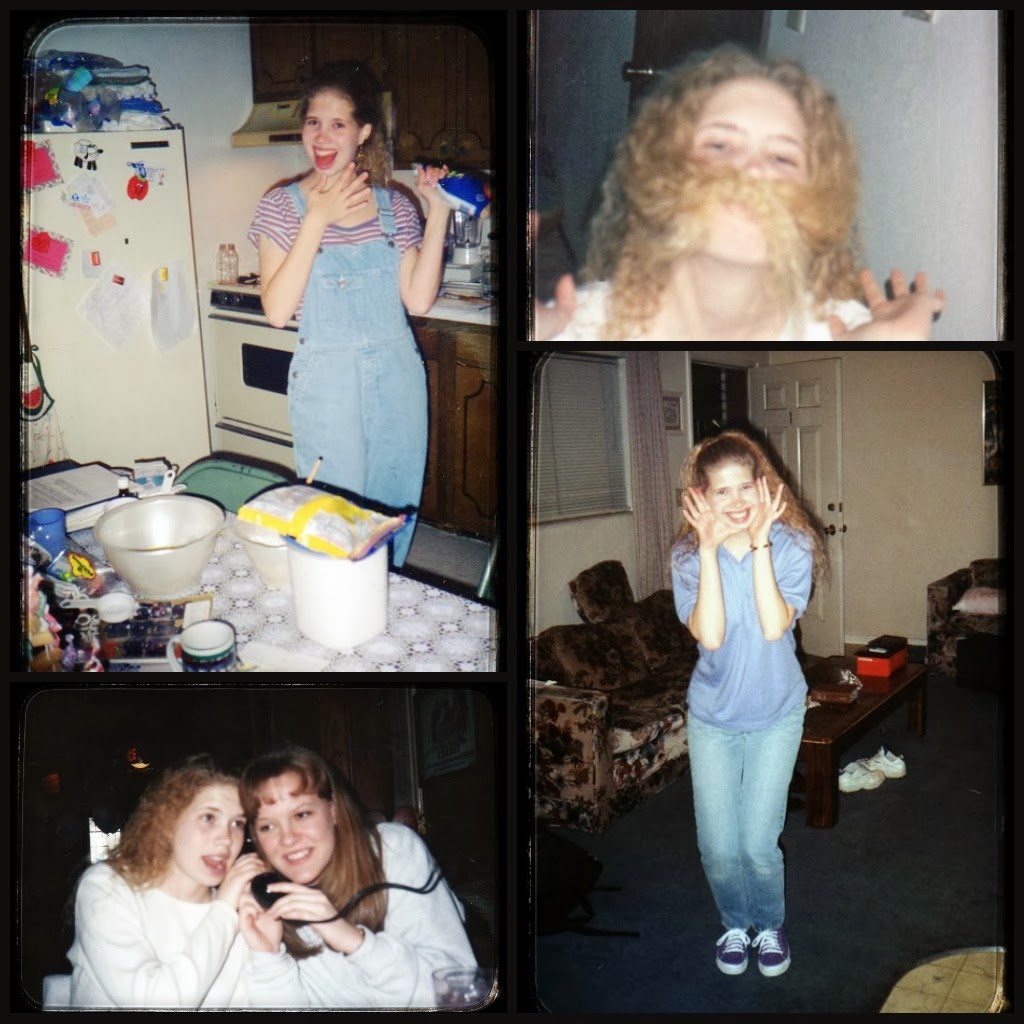 This beautiful lady went home on Thursday morning.  Her funeral is today, but I couldn't go, so I will remember her here.  I will always remember Jeni like the pictures above.  Long curly blonde hair and a wonderful smile.  She is one of my most favorite people ever.   We've been friends since high school and we were able to be roommates in college. Jeni was always willing to see the best in every situation.  In high school she was in a car accident and broke her back, but I never saw her use that as an excuse not to do something.  I honestly can't remember a time when she complained about it.  I'm sure she had her down times, but she did her very best to give her kids as normal a life as you can when going through cancer.  She was an amazing mother.  She had a cousin, Rachel, who was also her best friend and she was killed in a car accident on her way home from helping Jeni during her first go around with chemo.  I know there is a a lot of family welcoming Jeni home but I think the most joyous reunion happening in Heaven is between Jeni and Rachel.  I feel so blessed that I was able to visit with her a couple of months ago.  As sad as I am that she is no longer on this earth, and as hateful as I think cancer is, I am so thankful to know she is free from the pain her limited earthly body and with our Heavenly Father again.  I love you Jeni.

Decorating our new home has been painfully slow.  Living on a budget is only fun when the credit card bill comes;)  Chris gave me a Home Depot gift certificate for Christmas so I decided to tackle the guest room.  Why waste my money on a room we rarely use you ask?  Well it was kind of dark, didn't have a very good paint job, and I hated looking at it.  Also I have such a hard time making a decision on paint colors so if it didn't work out I could close the door and try to forget about it. I chose Benjamin Moore Stonington Gray, color matched at Home Depot.  I really like it.  The room seems so much brighter and cleaner.  I love to look at it and I have lots of ideas of things I can't wait to add.

Chris is a sweetheart and takes the day off for my birthday, but he won't do it for his own.  He doesn't really like much of a fuss, which makes us a good match because neither do I.  I made his favorite dinner and cake, but he had scouts and the girls had mutual so it was a small celebration.  I sure love this guy!

Posted by Kristen on Thursday, January 09, 2014 No comments:

New Years on the Strip

We had a great new years eve with family where I made the goal to take more pictures, then didn't take any.  Whatever, that's how I roll.  We decided that most of the new years eve crazies on the strip would be to hungover to come out the next day so it would be a good time to go out there.  I don't like to go to the strip very often so it's funny to me how much it has changed since the last time I was there.  I'm not sure when the characters started showing up, but there are a lot now.  We didn't get any pictures with them , because I'm not willing to tip for that, but it was actually kind of fun.

Posted by Kristen on Saturday, January 04, 2014 No comments:

We had a really low key Christmas this year (wait do I say that every year?) which was really good because I was feeling really stressed out.  Christmas Eve the kids got their pajamas (probably my favorite tradition, I love pj's!)  As per usual Christmas morning started extremely early.  I think Chris, being the trickster he is, may have conspired with Santa this year.  The last present the kids opened was a Wii-U, something Dalin has been asking for almost everyday for over a year.  The excitement was short lived, because when the kids opened the Wii-U box it was full of lotion.  Santa was trying to be tricky, but he also showed some kindness because after some investigating the kids found that the Wii-U was already set up and ready to play.  Silly Santa!  We went to my parents house for breakfast and more presents.  My grandma Haynes was visiting and it was really nice to have her there.  We decided to have Christmas dinner by ourselves, but I didn't want to cook.  I figured we could find some Chinese restaurant that was open (you know like in the Christmas Story movie) but no.  We ended up going to Buffalo Wild Wings.  Not to fancy, but we have fun when we are together:)  MERRY CHRISTMAS!
Posted by Kristen on Monday, December 30, 2013 No comments:

I found an organization called smiles change lives that works with local orthodontists to offer braces at a huge discount.  I sent in applications for Kaylee and Ashton, and part of the application asked for several up close pictures of their teeth.  Our dentist was kind enough to loan us a cheek retractor so we could get better pictures and it was so funny we all had to give it a try.  Do you remember Two Face from the batman cartoons?  It looked a lot like that.  Hilarious, and slightly crazy!  Don't worry, we thoroughly washed and disinfected it before it got passed to the next person.

Posted by Kristen on Wednesday, December 11, 2013 No comments:

Dalin has had more field trips at this school than all of my did kids last year combined.  Lucky!  I got to be a chaperon and it was lots of fun.
Posted by Kristen on Thursday, December 05, 2013 No comments: