School started on Monday and even though my kids have only been out for two weeks, I was ready for them to go back. They were actually all ready early so we got there on time. As we were walking to the school I asked Kaylee and Ashton if I could give them a hug or if they were to old for that kind of stuff. Ashton said she wanted a hug but Kaylee, who was already walking about ten feet in front of us said something I couldn't hear which I took to mean NO WAY! I was okay with that though because I said loudly, "that's okay no one needs to know your mother loves you!" Got to love these prepubescent years (I'm sure it will only get better when she's a teenager). On the way to school Dalin kept taking his shoes off and when Kaylee told me it happened again I said that's because he's a punk. He then replied by making a spitting noise and saying, "I spit my punk out!" He sure knows how to use humor to get out of trouble. The rest of the kids thought this was hi-lar-i-ous and they have been trying to get him to repeat it all week. He's now added a warning of "watch out for my punk" after he spits it out. That kid cracks me up! 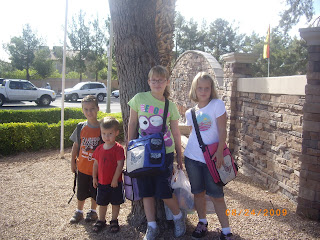 I forgot to take the first day of school picture at home, so this is right after we got out of the car at the school. 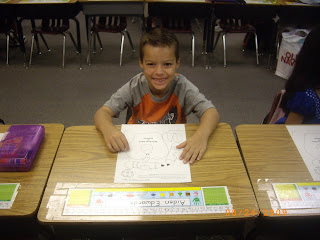 The girls go to a different school than Aiden (it's next door and it's grades 3-5), and they don't let the parents come into the classroom on the first day, so I only have Aiden at his desk. Isn't he too stinkin' cute!
Posted by Kristen on Thursday, August 27, 2009

Your kids are so witty. They must get it from their mom. I hope my kids adopt some of Jason's craziness just to keep me entertained. I hope they have a good year.

They look so cute, Aiden look so grown up. I love what you said to Kaylee, I love doing stuff like that to my kids.Especially to Austin Hee Hee! Dalin must be putting his comedy act together in his head. He is so funny.