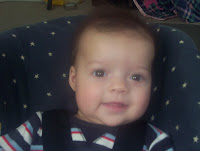 HAPPY BIRTHDAY AIDEN!!!! (I wrote this yesterday, but I didn't post it until this morning, his birthday was on the 11th and that is why I posted twice today.) Yesterday was Aiden’s fifth birthday and I can’t believe how fast he’s grown. I know every parent feels that way, but I’m sure time passed by much slower when I was a kid. We went to the Acacia Park here in town which is also a water park. It just has water shooting out of the ground so it’s not as fancy as some of the other public water parks here, but the kids thought it was great. Our family all came and we had a BBQ and cupcakes that spelled out “Happy Birthday Aiden”. I had never been to that park before so we drove down the day before to check it out, and Aiden was so proud of himself because he helped pick such a fun park. While we were cooking up the food, this little boy probably six came up to me and said, “Hi my name is Tyler and watermelon is my favorite food.” I had to laugh and I told him if it was okay with his mom he could have some. I saw him go talk to his mom and then he came back for his favorite food. I was a little surprised because I don’t think I would ever let my kids ask for food from strangers, but I guess there was a big group of kids with us so his mom thought it was safe. I have been known to go a little overboard and stress myself out when it comes to the kids birthdays, between decorating cakes and putting together goodie bags it gets a little crazy. I decided that I would scale back this year and leave out the goodie bags and have cupcakes instead of decorating a cake. I was commenting to Chris on how proud of myself I was for not getting so out of control this year, and he looked over at the table that was overflowing with BBQ supplies and he wasn’t sure how scaled back it really was. I felt less stress so it was a hit for me. The day before his birthday Aiden said, “Mom right now I only come up to Ashton’s shoulder, but when I wake up tomorrow I’ll be up to her neck because I’ll be 5.”

Aiden started preschool last week and he really likes it. He is the star of the week, which means he gets to bring his favorite snack, be the special helper and make a poster about himself. On part of the poster he had to write down three wishes. His first wish was to be rich and famous. After thinking about it for a second he said, “No wait, take off the famous part my teacher will think that’s silly. And you can take off the rich part too.” I convinced him it was okay and I was sure the teacher wouldn’t think it was silly at all. His second wish was to have a cool car, and wish number three was to be really cool so that everyone would want to be his friend. I think I should ask him again, because I don’t think his wishes would be the same two days in a row.

Kaylee was tested for the G.A.T.E. (gifted and talented education) program last week, and we should find out in the next couple of weeks if she made it. She also gets to attend student council meetings as a representative of her class. When I was in elementary school I got to work in the lunchroom, library, and I was in the A.T. (academically talented) program. I had so much fun so it’s exciting for me that Kaylee gets to be involved in school activities.